Reflecting on the Importance of One’s Word as an Adjuster

I’m sitting in Morrison, CO, enjoying a view of the Red Rocks formation as the sun comes up. It’s…awe-inspiring. A really cool job perk of the claims business is that it can bring us all over the country to stunningly beautiful places. 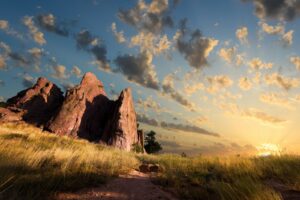 I remember well my first CAT assignment, and my first storm manager’s ominous warning about the importance of communication. He cautioned that many CAT adjusters fail not from lack of ‘technical’ skills (such as construction knowledge) but for lack of ability to communicate effectively. I learned quickly that he was right on the mark; management of expectations and the development of trust is essential to claims success in more ways than one.

For example, when you’re on deployment, pressure quickly becomes intense. Every claimant wants you inspecting their loss yesterday, and they can be pretty forceful about it. Likewise, the claims company wants your claims closed and invoiced now, and the threat of losing claims due to failure to perform is real. Between the two, the temptation to over-promise is huge. ‘I’ll be there tomorrow’ you say while crossing your fingers because you know how unlikely that is. The problem with over-promising is that you’re bound to under-deliver. In other words, you say one thing and do another. When you fail to arrive when you say you’ll arrive, you’ve broken an important trust, and you’ve seriously damaged the claims process.

Returning phone calls is another important one. When there’s a large-scale disaster, claimants can tend to worry about getting taken care of, and that can translate into multiple calls to their adjuster. I’ve found that it’s better not to take calls in the field, if possible. Instead, my claimants reach my voice message explaining that I return all calls after 5pm. Callers always want to talk now, and they won’t be happy having to leave a message. This means that they’ll be annoyed and waiting to see if you really do what you said you’d do, i.e. call back after 5pm. If you call back as promised, the system works. They relax, gain confidence in you, and feel comfortable leaving messages when they need something. But more often than not they’ll quit calling, because now they trust you’ll do what you say you’ll do, and you’ve said you’ll be out to inspect their loss in a week.

On the other hand, if you don’t call back as promised, all hell can break loose. You’ve just proven you’re the kind of person that doesn’t do what they say they’re going to do, which throws everything you say and do into suspicion, thereby undermining their trust in you and your authority as their adjuster. This can change the claims process from a smooth, simple transaction where you’re in charge (because you’re the expert from the insurance company), to a messy battle between two frazzled and unhappy people. Of course, this greatly diminishes both the enjoyment and the profitability of adjusting, because you’ll close fewer claims and have more problems.

I’ve often marveled at the fact that it takes courage to tell it like it is. I mean, if you tell a claimant you’re not going to be out to inspect as soon as they’d wish, they’re not likely to actually kill you, or even touch you. But it can be hard nonetheless. We want everyone to be happy with us. It takes courage to say things that people don’t want to hear. It takes strength of character not to be a people-pleaser.

But the irony is that, when we do say things like they are, people are ultimately happier.