Texas and the Reciprocity Myth

At AdjusterPro, we visit with hundreds of new and aspiring adjusters monthly about the best way for them to break into the adjusting industry. For most, licensing is their first step and so the discussion naturally bends towards an exploration of what license will best serve their interests. And for many years, the default answer to this question provided by the industry has been universally one state – Texas.

“Texas is reciprocal with every other state,” “Texas has the most reciprocity,” “Texas is reciprocal with 32 states,” and other such statements became commonplace. The notion that Texas somehow represented a magical silver bullet reached levels such that residents of states like Florida and Georgia (with their own clear licensing prescriptions) would pursue a Texas license in preference to their home state.

We’ve always tried to temper those kinds of expectations and advocated for getting your home state’s license whenever possible. Still, Texas overwhelmingly endured as the state of preference.

All that said, I think it’s time to officially debunk the myth of Texas as a licensing cure-all and the notion of Reciprocity in general.

Let’s start with Reciprocity.  According to our friend Mr. Webster, reciprocity is defined as “a mutual exchange of privileges; specifically: a recognition by one of two countries or institutions of the validity of licenses or privileges granted by the other.”

Let’s take two states at random – Georgia and Utah. If Georgia and Utah were reciprocal, that would mean that Georgia would specifically recognize the validity of Utah’s license and vice versa. It could play out in a couple of different ways: first, it could mean that licensed Utah adjusters could go work in Georgia under the authority of their Utah license…and, of course, vice versa.

This would be kind of like reciprocity amongst some country clubs. If I’m a member at Crestwood Country Club, that means I’m able to play golf at Blue Hills Country Club and a number of other clubs in their mutually agreed upon network through reciprocity.  It doesn’t mean I’m a full member of those other clubs, it just means that I can play there.

So, as a licensed Utah adjuster, you could “play” or handle claims in Georgia because Utah also agreed to let licensed Georgia adjusters do the same within their own state lines. Well, is that how things work with adjuster licensing? No, not at all. You can’t waltz into another state and start immediately handling claims under the authority of some other state’s license. It simply doesn’t work that way.

Ok, so maybe it means something less easy and free than that. Perhaps it could mean that Georgia would issue you a Georgia license if you held a Utah license first? And, of course, Utah would do the same for Georgia licensees. Now, that is starting to sound a lot more like the way things operate in the world of adjuster licensing. You can’t operate in a reciprocal state immediately, but you can get that state’s license without having to take the state exam, etc.

Well, not so fast. It’s true that a licensed Utah resident can get a Georgia non-resident adjuster license without having to take the Georgia prelicensing course and exam but, and its a big B U T, it isn’t because of any mutually agreed-upon arrangement between Utah and Georgia. (Sorry Utah, but Georgia just doesn’t love you that much.) Rather, it’s because you hold a resident license. Georgia, and the vast majority of other states will license you “reciprocally” if you hold a resident license in your home state.

Alright, at this point, the question begins to appear academic. Isn’t it just semantics and who really cares if it’s truly reciprocity or not if, at the end of the day, you can still get another state’s license through some kind of process?

That’s fair enough with one extremely important qualification. Because inter-state licensing turns upon the question of residency more than the question of state, there really aren’t any states that are more or less reciprocal.

And that brings us back to Texas.

Texas is really no more “reciprocal” than Utah, Georgia, or just about any state out there that licenses adjusters. That’s because true reciprocity doesn’t have anything to do with it – residency does.

Adding to this seldomly acknowledged reality are the recent developments at the Texas Department of Insurance with regards to non-resident licensing. Now, non-residents of Texas who hail from a licensing state cannot get a Texas license without getting their home state’s license first. Not even if they wanted to! TDI has rather effectively put the hammer down on this longstanding misconception themselves.

So what’s the upshot here?

Well, I think this means that the adjusting industry will begin recognizing that it isn’t about getting one particular state’s license over another, and certainly not Texas as a uniquely superior preference. Rather, it’s about, and really has always been about, getting your home state’s license first and then operating from there.

Of course, for those residents of the 16 non-licensing states, Florida remains our recommendation for your Designated Home State (DHS) license. It’s fast, offers wide reciprocity, has a large number of claims opportunities, and best of all, you can get it 100% online with our Florida Certified Adjuster course.

For more details on state licensing rules and regs, visit your state’s licensing page on our website and scroll down to the FAQ’s. Or type your state’s name into the blog search bar above and read the ‘How to get your License Guide’ for your specific state.

If you have any questions about the licensing process, getting reciprocal licenses, or insurance adjusting as a career, we would be happy to help. 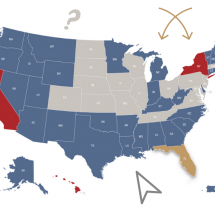 Reciprocity: The Truth about Adjuster Licensing Agreements Between States