TORNADOS, WIND, HAIL...Spring storm season is here! Get started before the next big event by joining one of our Free Webinars.

When Evan Mason left the military, he had no idea what to do next. He was hesitant to go to college because of the massive commitment of time and money, plus he found the idea of pursuing a singular career path “frightening”. It’s safe to say he felt a little lost. He spent a few years doing odd jobs and trying different careers, eventually stumbling into insurance adjusting.

He never looked back.

Shortly after becoming an insurance claims adjuster, he realized this was what he’d been looking for all along. Who knew?

The pay was outstanding. The job got him out of the office and into the field. And, perhaps most importantly, it allowed him to help those who were suffering get on the road to recovery. Now, roughly 8 years later, he still works in the industry. So does his wife Anna. They both love what they do and can’t imagine doing anything different.

“I LIKE BEING BOOTS ON THE GROUND. HELPING PEOPLE IN A TIME OF NEED. THAT’S WHERE ADJUSTING REALLY MAKES SENSE.” – EVAN MASON

To this day Evan and Anna still love the adventure of insurance adjusting. It allows them to meet people from all over and explore new parts of the country, even if it can be chaotic and unpredictable at times. That’s what makes the field so exciting. No two days are ever alike. But if you’re willing to work hard, be self-directed, and constantly try to improve yourself, you will be successful.

That is where AdjusterPro can help. We have the tools to not only get you started but also keep you going throughout your insurance adjuster career. And when you consider the relatively low cost of time and money to get a new career started, it’s a no brainer. Just ask Evan. He gives the lion’s share of his success in the industry to the support he received from AdjusterPro from day one.

“I OWE MY CAREER TO THIS COMPANY…THEY’RE AMAZING.” – EVAN MASON

If you’re interested in following in Evan and Anna’s footsteps, check out How to Become a Claims Adjuster in 5-Easy Steps. If you’re a military veteran considering a career in insurance adjusting, you may be eligible to have your adjuster exam testing fees reimbursed. Visit VA.gov to see if your state’s exam is covered or check out our Veteran’s Page. 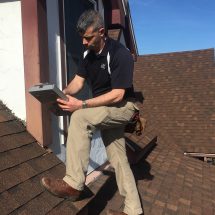 We’ll discuss what you need to know about getting licensed and going to work in our free webinar or call our Career Consultants at (214)329-9030.