Third in an ongoing series about how employers can succeed in an increasingly complex adjusting industry.

My good friend and colleague, Adam Gardiner, has done a marvelous job recently of chronicling some of the changes afoot in the adjusting industry. Slowly but surely, the Wild West is being tamed as the freedom of the open range simmers down under the rhythmic purr of air-conditioning. Call-center hubs and inside adjusting are becoming the new norm. The spurs are coming off. Outside is moving in.

But with big change comes big opportunity. Those who are resourceful and forward-thinking enough to adapt quickly will position themselves for huge wins in the new dispensation. This is particularly true for independent adjusting firms. The decisions IA firms make today are critical in determining their future success. Established, big-time players stand to lose and new players stand to gain as the shifting ground momentarily levels the playing field. The stakes are high!

One has to look no further than the adjusting firms’ HR departments to see the effects these rapid changes are having on our industry. Hiring managers are scrambling to meet the rapidly growing demand for inside adjusters.

One has to look no further than the adjusting firms’ HR departments to see the effects these rapid changes are having on our industry.

Firms are looking for ways to help their former outside adjusters become successful inside adjusters. Promoting people with the right skills for management, not just the next in line, will also be key in developing a company with staying power.

Who will come out ahead?  Time will tell but based on our observations, we strongly believe it will be the firms that put the right people in the right roles. Sounds easy enough. But the truth is that it takes time, effort and outside-the-box thinking to do it right. Those who can best solve these challenges will be positioned for long-term success.

The Right Stuff is all Wrong?

Imagine the following scenario: Jim Jones is an ace field adjuster. An IA firm’s dream. He gets claims closed fast, with no dings on his reinspects and absolutely zero hand-holding from the home office. He’s smart and independent, and policyholders love working with him. If you were to write a book about the perfect field adjuster, Jim’s face would adorn the cover. Now let’s suppose that Jim was asked to move to a call center to handle inside claims. What might the result look like?

We’ve found that this little change of scenery can make a HUGE difference in how people respond and their productivity.

Jim had the right stuff for field adjusting but that same stuff may not be right for inside adjusting. In fact, it very well may be the wrong stuff entirely.

Conversely, let’s consider a different individual and situation. Ben Brown is fresh out of college and has no professional experience. He’s a natural people person who loves being part of a team, articulating ideas and working within a carefully defined structure to serve others. Ben has the makings of a successful claims adjuster but where is he best suited to excel? I would contend that Ben might be ill-fitted to working right away in the field. He probably doesn’t possess the experience or confidence yet to operate effectively as an independent operator and his natural comfort zone has him working alongside his peers. However, Ben might be ideally suited to working claims in a call center.

If you took Jim and Ben and put them in the same call center, no doubt that Jim with his years of experience would immediately establish himself as the better adjuster. But how about in 2 months?

…no doubt that Jim with his years of experience would immediately establish himself as the better adjuster. But how about in 2 months?

Just as Ben was getting on his feet with inside claims, Jim might be starting to resent what he perceives as confinement and repetitive tedium. In 5 months? Jim is figuring out how to jump ship (or more likely, he already has) whereas Ben is just hitting his stride.

A final scenario – Sarah Smith is an exemplary inside adjuster. She loves the hustle and commotion of the call center and the satisfaction of following a strict protocol of to-dos to predictably accomplish her goals. The regular hours under supervision help keep her accountable and she has developed a reputation over the years for getting things done reliably. Now suppose it’s time to hire a manager to lead a team of 12 other inside adjusters. Sarah would certainly be a natural choice for HR to consider. She already has a proven track record to show she knows how to be highly productive in an inside claims environment. On top of that, she is a good communicator and other inside adjusters really like working with her. Sounds like a slam-dunk! Unfortunately, again it’s not so simple. In Sarah’s case, there is the temptation to succumb to a very real problem experienced by HR departments everywhere. It’s called the Peter Principle.

Our friends at Wikipedia describe it:

“The Peter Principle is a concept in management theory formulated by Laurence J. Peter which states that the selection of a candidate for a position is based on the candidate’s performance in their current role, rather than on abilities relevant to the intended role. Thus, employees only stop being promoted once they can no longer perform effectively and “managers rise to the level of their incompetence.”

“The Peter Principle… managers rise to the level of their incompetence.”

Simply put, promotion happens solely based on past performance without looking intentionally at the future potential for success in that role. Eventually, people will be promoted until they reach a level where they are no longer good at their jobs and the entire company suffers. Great adjusters don’t necessarily make great leaders. And while promoting based on past performance is certainly understandable, (I know we’ve done it here at AdjusterPro!) it is no way to build an effective leadership team. In the case of Sarah above, she may well be a great leader, but that shouldn’t be assumed simply because she is good at what she already does.

So, what’s going on here? Why is it that such subtle differences in place and responsibility make enormous differences in productivity and success? Stay tuned and we will dive a little deeper here…

Coming up next:  Getting the Right People in the Right Seats on the Bus 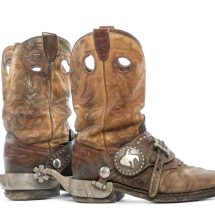 Time to Hang Up the Spurs?