TORNADOS, WIND, HAIL...Spring storm season is here! Get started before the next big event by joining one of our Free Webinars.

During my work with our insurance carrier clients, I’ve often been asked “Which DHS License is best for my staff adjusters?” or “What DHS should my employees get?” It’s an interesting question…and one worth putting some thought into. But before we delve into which DHS is best, we need to start with the most important point about licensing.

If you (or your employee’s) state licenses adjusters, you need to get that home state license first. No if’s, and’s, or but’s.

Whether we are talking about an independent adjuster or a staff adjuster, the Designated Home State or ‘DHS’ license was created to provide individuals who are residents of non-licensing states, a means to designate a home state for the purposes of reciprocity and compliance. It should only be used for individuals who do not reside in a licensing state.

Most states will only grant a reciprocal license to an adjuster who is licensed in their home state, or one who designates a home state and holds that license. If you want more information about DHS licensing and why you need one, check out our article The DHS Adjuster License.

In this article, we’re focusing on what DHS license is best for company/staff adjusters. Let’s walk through a few factors that you need to consider when licensing staff adjusters.

As it usually goes in the insurance regulation world, what seems really simple at first glance gets a bit more complicated in the fine print.

Now let’s say you work for Gallagher Bassett as a salaried adjuster and you handle Allstate claims AND Gallagher Bassett claims. It would seem like you’re a staff adjuster because you are salaried and working for an insurer, right? Not so fast. The claims you are handling for your employer, in this case Gallagher, are actually for policies written by Allstate. In this situation, as far as licensing goes, you are considered an independent adjuster.

So, going forward, we will refer to “staff adjusters” as those who are salaried employees for a carrier handling claims solely for that carrier’s policies. Everyone else we’ll consider an “independent adjuster”.

At this point you might be thinking “Who cares? Staff adjusters and independent adjusters all get the same license.” Well, stick with us here because the answer is yes…and no.

As far as the legal authority to handle claims goes, there is no difference between a staff and an independent adjuster license. However, some companies wish to keep a legal distinction, based on that adjuster’s relationship with the company.

Let’s look at some examples of the challenges. Say you live in Alabama which licenses independent adjusters, but not staff adjusters. Legally, a staff adjuster can get the Alabama license as a resident of that state and use Alabama’s reciprocity to get other licenses as well. Or a resident of the non-licensing state of Tennessee could choose Alabama as their independent DHS and use that to apply for other licenses.

However, if this adjuster is technically a staff adjuster, the company’s legal department may not want the adjuster to be licensed as an ‘independent.’ Remember, being an independent adjuster implies certain things about that adjuster’s relationship with the company.

Again, and I know it sounds odd, this will not affect that adjuster’s ability to legally work claims. But it could potentially affect other legal matters surrounding employment.

These are just a few of the complications that can arise when dealing with staff vs. independent licenses. Circumstances can vary by company and regulations definitely vary by state. We’ve worked with a lot of employers and have asked a lot of questions to state departments when it comes to these issues. While we can’t offer legal advice, we would be happy to walk through your situation and offer any information we’ve learned from experience.

Most of these licensing issues revolve around adjusters of all kinds wanting/needing reciprocal licenses in other states. Being able to obtain multiple licenses is vital for independent adjusters, staff adjusters, and the employers of both parties.

Independent adjusters can see where they can get reciprocal licenses in our interactive reciprocity map. If you’re a staff adjuster, far fewer states require you to be licensed. You can see a map of staff adjuster licensing states here.

As you can see, it’s important to determine what kind of adjuster you or your employees are so you don’t waste time or money getting unnecessary licenses.

What factors should I consider in choosing a DHS license?

Once you know what type of adjusters you employ, you will want to recommend a DHS to those who reside in non-licensing states. But which DHS license is best for staff adjusters?

Adjuster license reciprocity has made huge gains over the past 10 years and most licensing states are reciprocal with one another today. But there are some other important factors you should consider when choosing a DHS license for your team.

Have Questions about staff licensing?

Get in touch with our corporate team. We’d be happy to walk through your needs and help you determine which licenses are best for your adjusters.

Honestly, there probably aren’t any surprises here. If you do the math on everything we mentioned above, Florida is the state that meets or exceeds all the criteria we’ve discussed.

Florida’s pre-licensing and exam can be done entirely online, without a proctor. They don’t charge for re-taking the exam. Their All-Lines license has great reciprocity and the exam is 50% shorter than some others. Florida meets all the CE and fingerprinting requirements as well. Perhaps most importantly to an employer, Florida is the quickest state in turning around applications.

Texas is another state we recommend although it does have some drawbacks. Texas offers online pre-licensing and exam, but the exam is significantly longer and requires a proctor. The state has made recent commitments to improve their processing time but again, there is just no beating Florida there.

Again, every situation and every employer is a bit different. Your company may have employees with special circumstances or claims with certain needs. There really isn’t a “one size fits all” solution here but, for our money, Florida comes close.

Whether it’s independent adjuster licensing, staff & company licensing, or claims regulations in general, things can get convoluted rather quickly. Our team works with corporate clients of all sizes, on licensing issues of all types, daily. If you have questions or concerns, give us a call. We’d be happy to help. 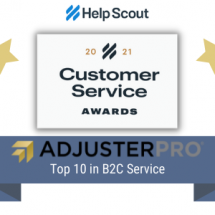 Talk with our Corporate Team